Description of the Collections 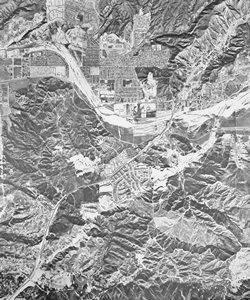 The aerial photography and atlases series in the Henry J. Bruman Map Collection cover 1965 to the mid 1990s.

In addition to the specific sets listed on this page, we have air and satellite photographs for scattered places around the world, usually single images of a given place or region. Many can be found in the UCLA Library Catalog. Consult with reference staff to determine whether there are any available for the area in which you are interested.

The collection mainly concentrates on the City of Los Angeles and Los Angeles County, with a few images covering adjacent counties. These series vary in scale from 1:40,000 (1 in. = 0.64 mi.) to 1 in. = 100 ft. All of these series are vertical shots, meaning the photo has no tilt in it. With few exceptions they are black and white images. They vary in physical size from 9 × 9 in. to approximately 3 × 4 ft.

The UCLA Geography Department houses the Benjamin and Gladys Thomas Air Photo Archives. They are not part of the UCLA Library system; access is by appointment only. There are fees for viewing the collections and for obtaining copies of individual photographs. The Archives provide photos from two collections:

A variety of oblique low altitude black and white aerial photographs of Southern California between the years 1927 and 1964. Similar coverage as the Spence Collection, but not as extensive. Limited coverage of Arizona, Nevada, and other states.