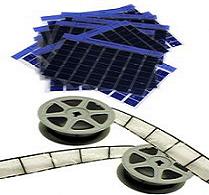 Microfilm is a method of preserving and storing large amounts of print materials in a small space. It's commonly used for newspapers because they're both bulky and the newsprint paper deteriorates rapidly. Each page of the newspaper is copied and shrunk down to a tiny image, and the images are then printed sequentially on a reel of film. The images can later be expanded and displayed using specialized equipment, which allow users to scroll the film from page to page.

Why Would Anyone Want to Use Microfilm?

Nobody wants to use microfilm! But it's often the only choice. The majority of newspapers only have online content starting in the 1990s, or even the 2000s. Also, many online news sources only archive the text of the articles, without photos and advertisements. To fill those gaps, libraries still purchase microfilm editions of newspapers.

How Do I Use Microfilm?

Microfilm reels can be viewed and printed on microfilm reader/printers located in those campus libraries with microfilm collections. Because it requires special equipment to use, microfilm is non-circulating and can only be used in the library. However, most libraries will loan microfilm to each other, so you can request reels not owned by UCLA by interlibrary loan.

To find specific newspaper indexes in the UCLA Library Catalog or the Melvyl Catalog (UC and beyond), search for the newspaper title plus the word "index". Most smaller newspapers were never indexed, and even many of the major ones only have indexes going back to the 1980s. For those cases your only option is to actually skim the microfilm reels page by page for the content you're looking for.

Finding Newspapers by City of Publication

The results will be a list of newspapers from the publisher location searched.