This guide serves as an orientation to use of relevant research materials held by Library Special Collections.

The following is a list of film titles that are represented in Library Special Collections's holdings. The list is in process and will be updated periodically.

Once you have identified a title in this list, search for that title (in quotes) in the Online Archive of California to locate the specific collection holding those materials. The list indicates if multiple collections hold certain materials, for example, "scripts (2 collections)."

If you don't see the title you are looking for, don't hesitate to ask a Library Special Collections staff member.

The collection consists of clippings, stills and a small amount of ephemera related to the careers of actors Lionel, Ethel, and John Barrymore.

Among his many roles on stage, screen and television in a career that spanned sixty years, American comedian and dancer Ray Bolger was best known for his role as the Scarecrow in the 1939 film, The Wizard of Oz. In addition to his work in film and television, he continually returned to the stage, often appearing in one-man shows. The collection consists of script material, contracts, clippings, correspondence, photographs, music, and ephemera related to Bolger's lengthy career.

Silent film actress Priscilla Bonner performed with such stars as Will Rogers, Tyrone Power, Clara Bow, and Gary Cooper. The collection consists of clippings and photographs related to the career of Priscilla Bonner.

Betty Bronson was an actress whose career began in Hollywood's Silent Era and spanned several decades. She is best remembered for her role as Peter Pan in the 1924 version of the film, Peter Pan. The collection consists of materials related to Bronson's career and includes clippings, photographs, correspondence, scrapbooks, and personal and professional ephemera.

There is very little biographical information available about Kendall Carly Browne. She was married to producer Her Braverman and was the mother of Bart Braverman. The actress' credits include The Ed Wynn Show and a small number lesser known projects such as I Wonder Who's Killing Her Now?, Fear City, and Dreamscape. More recent credits include the television dramas CSI: Crime Scene Investigation and ER.

Over the course of her career, actress and singer Diahann Carroll has been involved in a number of stage, motion picture, and television projects as well a business and philanthropic activities. The bulk of the collection includes musical arrangements, clippings, and photographs documenting assorted stage, motion picture, and television projects. Additionally there is a small amount correspondence, scrapbooks, awards, and ephemera.

Actress Virginia Brown Faire appeared in over forty silent film productions. The collection consists of photographs and scrapbooks related to her career.

This collection includes business papers, correspondence, sheet music, media, and memorabilia from the private collection of comedian and actress Phyllis Diller. Diller broke ground as one of the first and most prominent woman comedians through her stand-up act, films, television appearances, books, and records. Post-retirement in 2002, Diller wrote an autobiography titled Like a Lampshade in a Whorehouse: My Life in Comedy (2005), turned her hobby of drawing and painting into another career, and has continued to make appearances on television and in film.

This collection contains a vast array of materials related to the life and career of actor Howard Duff. The majority of the collection consists of film and television scripts. Also included are photographs, both personal and professional, radio sound recordings, correspondence, legal records, theater ephemera, military service materials, and sketches by Duff. Of particular interest are oral history transcripts, Duff's personal items including a wallet, make-up kit, passport, and eyeglasses, as well as materials related to Duff's first marriage to actress Ida Lupino.

Julia Duffy is a television, motion picture, and stage actress who is best known for her portrayal of Stephanie Vanderkellen on the television show Newhart. The collection consists of various draft scripts for television and motion picture projects in which Duffy was involved. Absent from the collection is material pertaining to Duffy's stage career.

George Gray was an actor, director and makeup man for both film and television. The collection consists of five photograph albums including George Gray's silent film production stills, personal and family photographs. Additionally, there are a small numner of casting directories for silent films.

Actress Carolyn Jones was best known for her role as the ghoulish Morticia in the television series The Addams Family. The collection consists of scripts and scrapbooks related to her acting career.

Actress and singer Shirley Jones has appeared in movies like Oklahoma!, The Music Man, and Carousel, and is well known for her role as Shirley Partridge on the television show, The Partridge Family. The collection consists of television scripts, screenplays for produced and unproduced motion pictures, and stage plays related to Jones's career.

Steven Keats was born in New York, 1945. He graduated from Manhattan's High School for the Performing Arts and then served in Viet Nam (1965-1966) before attending the Yale School of Drama and Montclair State College. Keats made his Broadway debut in the second cast of Oh! Calcutta (1970). His film roles include Hester Street, Death Wish, and Black Sunday. His television roles include The Awakening Land and The Executioner's Song. Keats died May 1994 of an apparent suicide.

Research material collected by David Walley during the early 1970s for the writing of his biography on Ernie Kovacs.

May McAvoy was a silent screen actress who gained popularity during the early 1920s. She also reigned as Rose Queen for the 1923 Tournament of Roses. The collection consists of photographs, film stills, clippings, and ephemera related to her career.

Nancy Malone began her career at the age of six, modeling and appearing on live radio and television programs. She went on to become an accomplished actor, director and producer and was a co-founder of Women in Film, the nonprofit organization dedicated to supporting women's roles within the entertainment industry. The collection consists of material representing Malones' involvement in various projects as actress, director and producer, her association with Women in Film, her contributions to the advancement of the entertainment community and her various achievements outside of the industry.

Alan Mandell is an accomplished theater and film actor, theater manager, stage director, and producer. He was a founding member of the San Francisco Actor’s Workshop and the San Quentin Drama Workshop, managed the Repertory Theatre of Lincoln Center, and was consulting director for the Los Angeles Actors’ Theatre and the Los Angeles Theater Center where he ran the Poetry Literary Series. Mandell is considered to be a foremost interpreter and scholar of Samuel Beckett’s works. Materials in this collection document Mandell’s professional career and include scripts, photographs, some personal materials, and correspondence with many notable literary and theater figures, including Beckett.

There is little information available about Todd Mason. During his career, he worked as an actor, did voice overs, and was a newspaper writer. From 1968-1975 Mason was an associate of Mike Connors and worked for the television series Mannix. The collection consists of writings, photographs, correspondence, and audio cassette recordings related related to his career.

Donald Randolph was a stage, film, television, and radio actor. The collection includes two scrapbooks of programs and clippings documenting a number of projects in which Randolph was involved, photographs, and a small amount of ephemera, correspondence, and writings by Randolph.

Jay Riley was an African American actor who started his career in 1932. He appeared in Broadway productions and also found roles in motion pictures and television. The collection consists of script material, photographs and a small amount of biographical information, press clippings, ephemera, books, and audiovisual materials related to Riley’s career.

Violet Schram was an actress of the stage, radio, and film. The collection consists of photographs, newspaper clippings, ephemera, and a poster relating to Schram's theatrical, radio, and movie career.

The collection consists of material related to the career of actress Ann Sothern. Includes scripts, business records, and production material for The Ann Sothern Show , along with correspondence, proposals for television series and pilots, production records for summer stock and night club acts, handwritten scores, and sheet music. Also includes a small number of audio recordings, photographs, and one scrapbook.

George Spaulding (1881-1959) was a screen, stage, radio, and television actor, as well as a stage producer and playwright. The collection consists of theater programs, mementos, and a scrapbook relating to the Spaulding's acting career.

Library Special Collections holds collections pertaining to specific people who played a prominent role in film. An example would be the Jean Renoir Papers. You will also find materials related to such individuals or film organizations in other collections, so be sure to use the keyword search function in the Online Archive of California, to find all available materials relating to those persons or organizations.

Nick Smirnoff was a production manager, assistant director, producer and photographer who has worked primarily between the 1970’s-2000’s in Los Angeles. His work includes numerous projects in the television industry, in addition to motion pictures and  commercials. His most notable projects include Felicity, The Toolbox Murders, and Miami Vice. The collection is comprised of  production and industry materials such as scripts, production reports, crew and cast contact lists, and publications containing  industry guidelines and procedures.

Dan Curry, born Daniel F. Curry, is an Emmy Award-winning fine artist and filmmaker. He is best known --- and has won seven Emmy awards for --- his work as Visual Effects Producer of Star Trek: The Next Generation, Star Trek: Deep Space Nine, Star Trek: Voyager, and Star Trek: Enterprise. This collection documents Curry’s work as visual effects producer of these series, as well as his work on other motion picture and television projects. The bulk of the collection dates from 1987 to 1992, and includes collected screenplays, montage storyboards, memos, recorded material, and Curry’s personal notes and hand-drawn illustrations.

Here you will find materials represented in a specific special format other than papers. Some of the formats included are set designs, posters, stills, and lobby cards.

The collection is primarily publicity photographs/stills of American actors, actresses, and other creative talent associated with the motion pictures and television industry.

Gary Franklin is best known a news and entertainment reporter for KCBS. The collection consists of oversize black and white mounted photographs taken by Franklin. The bulk of the images are political figures and entertainers. Additionally there are a very small number of location shots including Los Angeles area studios.

Ernest E. Reshovsky was a Los Angeles photojournalist. The collection consists of negatives and proof sheets of Reshovsky's work between 1949-72.

Here you will find collections of materials pertaining specifically to animators and animation.

Roy Newquist (b.1925) was a copy supervisor for various advertising agencies in Minneapolis and Chicago (1951-63), a literary editor for Chicago's American and a critic for the New York Post (1963). He also hosted a radio program called Counterpoint, WQXR, New York. His published books include Counterpoint (1964) and Conversations (1967). The collection consists of audiotape recorded interviews and documentation related to interviews of various authors and entertainers conducted by Newquist.

Library Special Collections holds a large amount of film music archival materials including materials for silent and sound films. For a more complete listing of these holdings, consult the Online Archive of California, using the keyword search term, "film music." 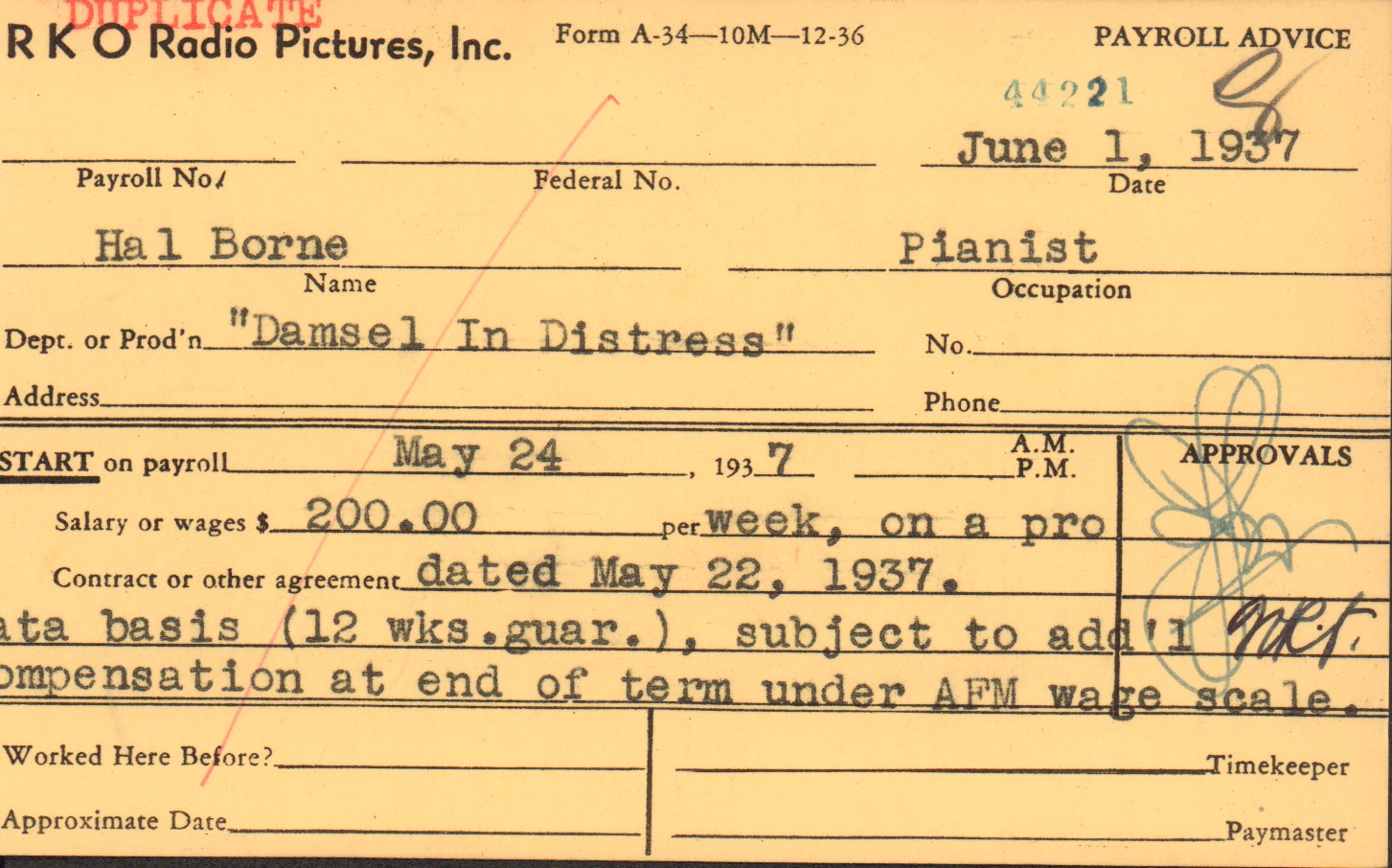 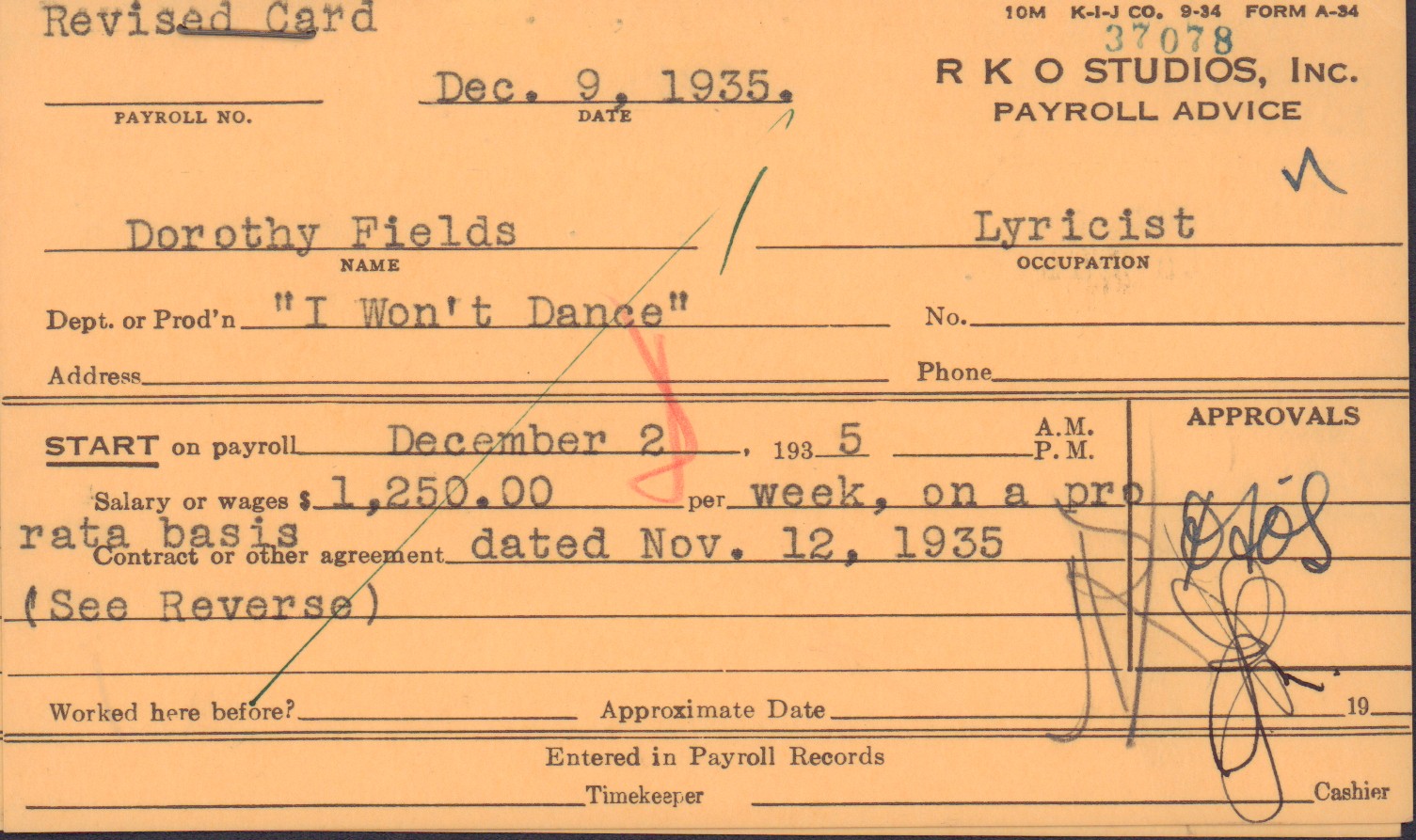