This guide assembles a selection of UCLA Library's primary source holdings in Chicana and Chicano history and is intended as a starting place to point researchers to significant collections that cover the history of Mexicans in North America. 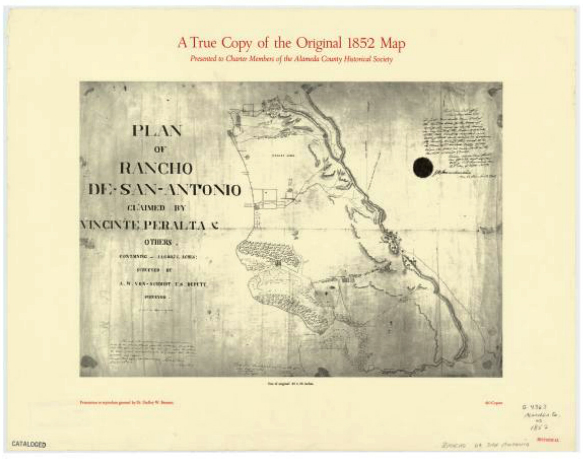 The history of California bleeds into the history of Mexico. From the pre-Columbian era to the present day, Mexico and California have been inextricably linked. UCLA Special Collections holds unique materials that document the politics, geography, and cultural life of this shared history prior to World War I.

When the United States took possession of California and other Mexican lands in 1848, it was bound by the Treaty of Guadalupe Hidalgo to honor the legitimate land claims of Mexican citizens residing in those captured territories. Those records, most of which were transferred to the U. S. Surveyor General's Office in San Francisco, included land deeds, sketch-maps (diseños), and various other documents.This collection holds an augmented index to the California Land Claims, v. 1-24, a record of claimants and briefs for ranchos in the 1850s and 1860s.

Rancho title abstracts document the legal process and the social, political, and economic history of early Californios in the context of rancho development in the Los Angeles region. Materials from this collection have been digitized and made available on the OAC at http://www.oac.cdlib.org/. Lesson plans for Grade 4 entitled Los Californios: California’s Spanish, Native American, and African Heritage are available on the California Cultures digital archive.

The collection features a series of printed proclamations put forth by governors and key administrators of the Federal District during the Mexican-American War (1846-1848). The majority of the collection consists of broadsides which would have been posted and read out loud to the urban masses. In addition, a number of pamphlets and larger broadsides reveal the federal government's preoccupation over the scarcity of war funds, civilian participation in the National Guard and indemnity payments to the United States. Also included in the collection is a four-item series on Maximilian's brief reign during the Imperial Regency (1864-1867).

Railroad Publications from the United States, Mexico, and Panama Collection 1870-1900

Thomas Crosby Lancey (1824-1885) joined the U.S. Navy (1846) serving as baggage master on the North Carolina before being transferred to the U.S. Sloop of War Dale as captain's coxswain. He kept a journal of daily occurrences which formed the basis of the three volume manuscript, The Cruise of the Dale, some of which Hubert Howe Bancroft used in preparing his History of California. The collection consists of historical notes, loose papers, clippings and ephemera chiefly concerning the American conquest of California (1846-1849), with particular emphasis on naval operations.

William Starke Rosecrans (1819-1898) commanded the Army of the Cumberland during the Tullahoma campaign and at the battles of Stone's river and Chickamauga during the U.S. Civil War. After the war, he moved to Los Angeles, California and became an advocate for railroad building and Mexican trade in the West before being appointed as the U.S. Minister to Mexico (1868). He later served in the U.S. Congress (1881-85), and as the Register of the U.S. Treasury (1885-93). The collection consists of correspondence, papers, diaries, accounts, photographs, maps, realia, and related printed material of Major General William S. Rosecrans and his family. The papers cover nearly a century of American history and are comprised of materials from three generations of the Rosecrans family.

Ana Bégué de Packman (1882-1973) served as Secretary of the Historical Society of Southern California from the 1930s through the 1950s. The collection consists of Packman's photographs, newspaper articles, manuscripts, genealogies, maps, ephemera, and correspondence pertaining to the history of the city of Los Angeles, California missions, and Southern California ranchos and adobes.

John Forster was an Englishman who moved to Los Angeles in the 1830s, and become a Mexican citizen with substantial property. This manuscript contains reminiscences of his experiences in California, with an emphasis on the battles between American and Californio forces in Southern California during the Mexican War. Dictated to Thomas Savage.

Diseños : maps and plans of ranchos of Southern California, mostly within Los Angeles and Orange counties [between 1841 and 1891]

Mexican pamphlets, broadsides, and other printed materials that cover a wide range of topics, including politics, religion, social issues, and commerce, primarily from the 18th and 19th centuries. Most of these ephemeral items were printed in Mexico City and, thus, they tend to present a view of Mexican reality as seen from the capital. Included is material on political polemics and church-state relations, devotional booklets, such as novenas, catechisms, and calendars, and items concerning the Virgin of Guadalupe, many of which are illustrated with engravings or lithographs. Among the works of particular significance are several by Carlos Maria de Bustamante and other written as answers to the "Pensador Mexicano" (J.J. Fernandez de Lizardi)

Antonio Vanegas Arroyo (1850?-1917) ran a printing house that issued a series of small theatrical works which were put in his Galería de Teatro Infantil. Some of his publications were illustrated by José Guadalupe Posada. Between them they produced "Perico el incorregible," "Casa de vecindad" and "Celos de negro con don Folías;." Vanegas Arroyo published the journals La gaceta callejera, El boletín, El jicote, El teatro, El centavo perdido and others. The collection contains 21 broadsides, some illustrated by José Guadalupe Posada, documenting Mexican popular literature between 1895-1925 in Mexico. The collection is in Spanish.