How to use and search the Contemporary Music Score Collection

Harlafti, The City Wears Nothing

Niki Harlafti, The City Wears Nothing

“This piece was inspired by the distant, echoing city sounds of Boston in the evening stillness, as I experienced them through my fifth floor apartment window, facing a brick highlight.”

"‘Farewell…’ for string quartet was written in 2012 for friends during my time living in New York City. It was my last composition written before moving to Los Angeles in 2013, and thus is a kind of adieu to my friends and to the amazing experience I had studying and writing in Manhattan.”

“ELDRED STEVENSON is a composer, musician and teacher based in Bristol, UK. He was originally a self-taught musician and producer, and was involved in countless recording and performance projects between 1990 - 2010, most notably founding economically catastrophic improvisation 'cult' The Orange Show circa 2001."

"'Deadlock' is a concerto custom-made for Baltimore beatboxer Shodekeh, an artist of vocal percussion." 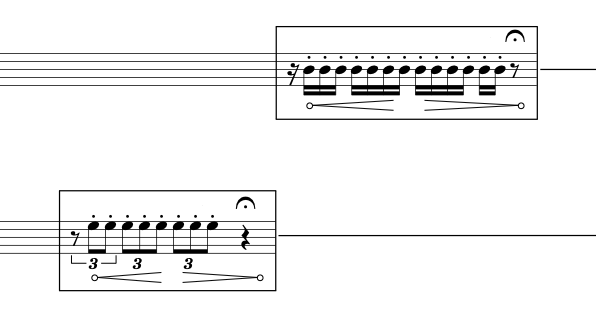 "'Intangible landscapes deals with the growing feelings of ennui and isolation I encounter[ed] living in New York over the past six years, and how perceived landscapes of memory shift, breathe and transform over periods of time."

“The lyrical cinematography and warm colors captured in the painting serve as the greatest impetus for my work, where I hope to create a calm ambience of nature comforting one's desire for a long-awaited reunion”

"This piece plays with elements of time, improvisation and repetition to mirror the meditative serenity of these long-exposure shots, juxtaposed with moments of sharpness for the stars’ brilliant arcs of motion.” 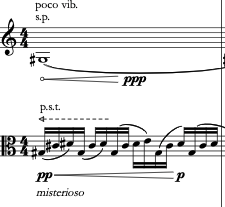 “Depending on the spectra of  their local stars,

the flora of  exoplanets may come in wildly

different colors than our own:

red, purple, blue, or even black.”

“This piece is based on real cases, a personal experience as a selected juror for a criminal case, and field research.”

“I have attempted to portray the happy and the sad, the anger and the numbing heartache. In the end, tonality prevails in a peaceful, possibly triumphant, return to happiness; the kind only resilience can reward.”