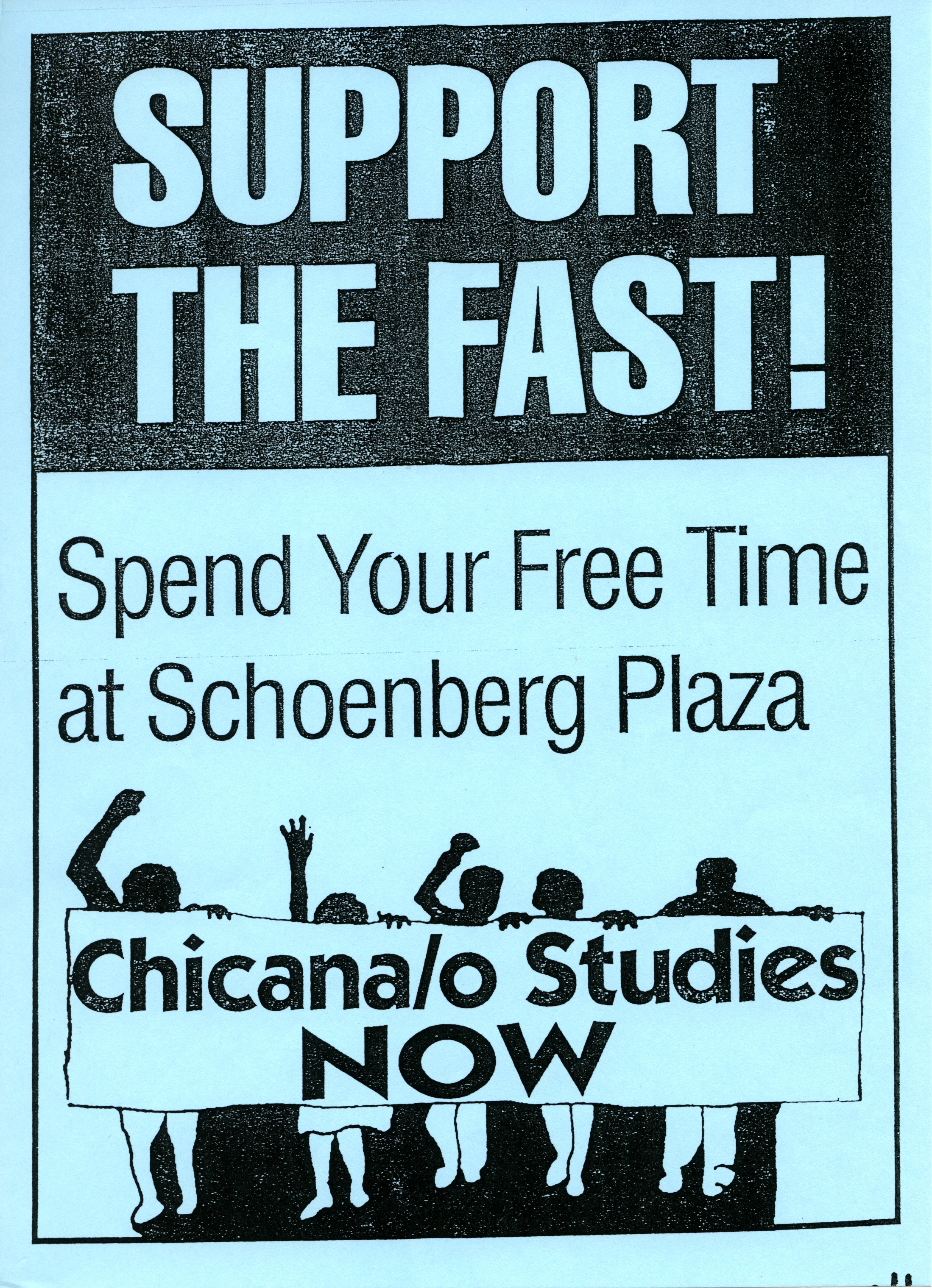 This collection consists of three boxes of flyers, memos, notes, form letters, faxes, photographs, and documents of the events that occurred during the 1993 Hunger Strike and related demonstrations. The materials were donated in 2002 by MEChA at UCLA. They are open to all users and can be accessed via the UCLA Chicano Studies Research Center Library and Archive

There were a number of actions, rallies and demonstrations on the part of a variety of student groups such as MEChA, the Latin American Student Alliance, and Students for Revolutionary Action, as well as other community groups. This collection covers the most dramatic demonstration: the 1993 hunger strike. This collection include correspondence from several supporters, including State Senators Tom Hayden and Art Torres, State Representatives Lucille Roybal-Allard and Xavier Becerra, City Assemblywoman Hilda L. Solis, Mothers of East L.A. and many others.

This collection consists of three boxes of materials related to Michael de la Rocha. De la Rocha is an activist, journalist, and artist and who recieved  his bachelor's degree from UCLA, where he served as the 1999/2000 undergraduate student body president. This collection covers his work as a journalist regarding Mexican American issues. The collection can be accessed by appointment via the Chicanos Studies Research Center.

This collection includes the papers of Gloria Molina, the Los Angeles Country supervisor of the First Superintendent District from 1991 to 2014. Materials include correspondence, agenda, motions, reports, press clippings, notes, ephemera, site plans, photographs, and audiovisual resources. Materials related to the Hunger Strike can be found in Box 886 and Box 1030. Box 1030 is sealed until 2024. This collection is held by the Huntington Library Manuscripts Department. The Huntington Library must be contacted ahead of time in order to use this collection.

This collection includes includes moving image and audio recordings from the UCLA Public Information Office. This includes VHS tapes in Box 112 of news coverage and other footage related to the 1993 UCLA Hunger Strike. The collection can be accessed by appointment at UCLA Library Special Collections in the Charles E. Young Research Library and materials must be requested before your visit.

The Los Angeles Times covered several of the events of the 1993 Hunger Strike and related demonstration and actions. The paper's archives can be accessed by subscribers.

La Opinión is the largest Spanish-language newspaper in the United States and the second-most read newspaper in Los Angeles. The Chicano Studies Research Center holds a collection of the newspapers's records. This collection includes albums, CDs, reader correspondence, film, internal files, negatives, newspaper articles, photographs, scrapbooks and slides. The dates range from 1982-2014. The collection was donated by Monica Lorenzo, CEO and publisher of the paper, to the center. The collection can be accessed by appointment via the center, although some audiovisual materials may not be available due to formatting issues and may require digitization in order to be viewed.